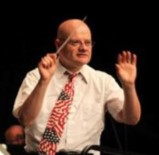 Laskey later earned a M.Ed. at Cabrini College in 2009. He began teaching in 1985 and has been a string specialist in the schools of Manahawkin, NJ, Souderton, PA, and Norristown, PA. He performed as a violist with the Pottstown Symphony and has been principal

violist with the Lansdowne Symphony, the Meetinghouse Strings, the Coventry Consort, the Orchestra of St. Peter by the Sea, and the Garden State Philharmonic. Currently, he is honored to be named principal violist with the Warminster Symphony and performs as a free lance musician with the “Una Corda Strings”, “A Musical Touch”, and with many other fine musicians throughout the Greater Philadelphia and Southern New Jersey area. Maestro Laskey is proud to be the musical director/conductor of the Verdi Band of Norristown, an Italian-American Band since 1997.