For information or scheduling, contact Business Manager Ken Hennessey by email at ken.hennessey@comcast.net or by phone at 215-802-7114.

“Music is the Gospel of the Human Heart, the Soul of Humanity.” These deeply moving words were often spoken by Professor Loreto Marsella, the man who founded the Verdi Band in 1920 at the peak of the immigration phenomenon. 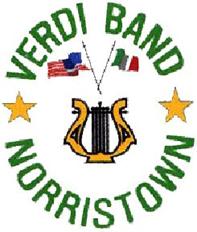 rsella’s fellow countrymen came to America expecting to find the streets “paved with gold.” Instead, they quickly learned that life was difficult and they spent long hours laboring in the mines, foundries, and sweatshops of America. They loved America, but they missed their hometown, too. When the “feast day” in their respective towns rolled around each year, they felt the pangs of nostalgia more intensely. Prof. Marsella knew this and wanted to give the people something that would allow them to keep their heritage, their traditions and most of all, their faith.

These then, were the driving forces which caused him to seek out men who felt as passionately about music as he did, and who shared the same desire to establish in their new country, the traditions of their motherland. And so, with about 30 men, he began the “Verdi Band of Norristown.”  And now 96 years later, his legacy and his music continues.

Two years ago the Verdi Band officially became a nonprofit 501(c)(3) institution in the Commonwealth of Pennsylvania.  It is the intention of its Board of Directors, that this status will provide the financial support needed to ensure the continuation of its mission well into the future.

Those who may be interested in funding philanthropic support are asked to contact John Gennaria, financial secretary at (610) 805-3886 or  jgennaria@hotmail.com